Sea stack climbing in Donegal brings a whole new definition to the term ‘rock-hopping’. Together with our guide, Iain Miller of Unique Ascents, we paddled around the Atlantic coast in search of sea cliffs and stacks with tricky routes, some of which have yet to receive a first ascent. While exploring parts of Donegal few other visitors get to see was a reward in itself, the birds-eye view upon reaching the pinnacle of a stack was a particularly special and vivid experience. 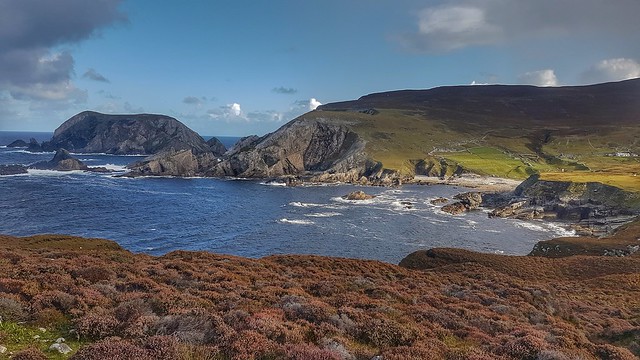 Our day began with a 30-minute drive down a narrow track to An Port. There were no other cars to compete for space on the road, which was lucky because we were too busy jockeying with the local tenacious sheep that blocked every turn. The landscape, initially mountainous, gradually receded to stretches of fields before the Atlantic ocean slowly emerged on the horizon.

Sea stack climbing in Donegal brings a whole new element of adventure to the sport – as well as challenging factors. Tidal times, wave heights and sets, wildlife, wind speed; all these ever-changing elements must be taken into account when choosing a climbing spot. While the weather on the day was vacillating between high winds and stretching out the last days of summer, Iain knew a stack we could explore for a few hours before the tide came in. 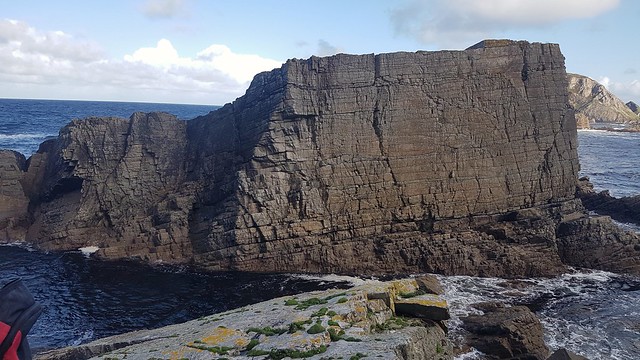 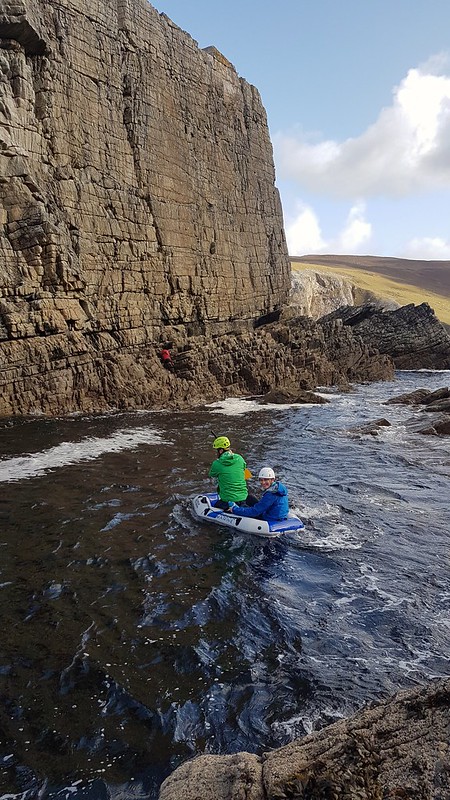 When it comes to sea stack climbing, getting there is half the adventure. Within minutes, Iain had pumped an inflatable dinghy and paddled the equipment and each of us over while dodging some particularly turbulent waves. As soon as we arrived though, it was all systems go. Starting first, Iain trad-climbed to the top of Berg stack, and after setting up an anchor, it was our turn. 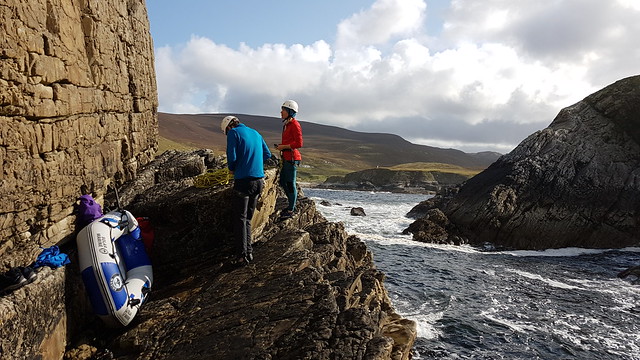 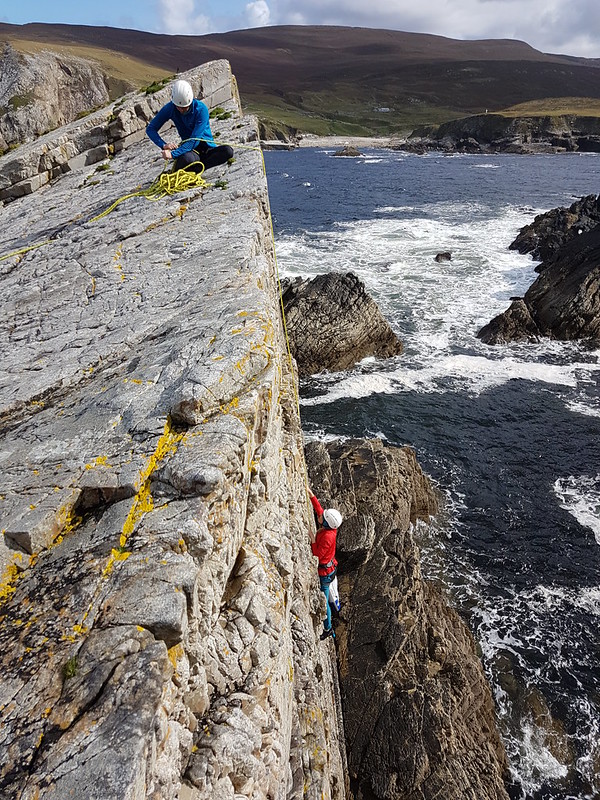 The first routes were an ideal warm-up, simple grade 4 climbs with lots of footholds, cracks and jug holds. The rock was strong and solid; any loose sections had been removed long ago by previous climbers. Iain has been exploring Donegal’s stacks and cliffs for years, and has a seemingly encyclopedic knowledge of the routes. Soon he was progressing us to 5a and b routes, and then a grade 6 that had yet to receive a first ascent. How often do you come across that when climbing in established destinations in the UK? 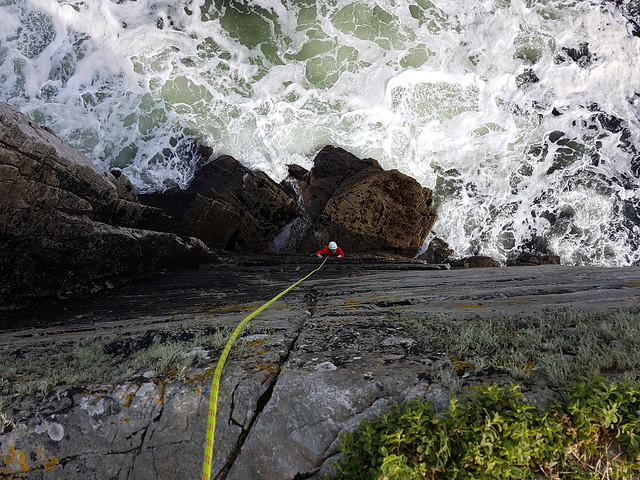 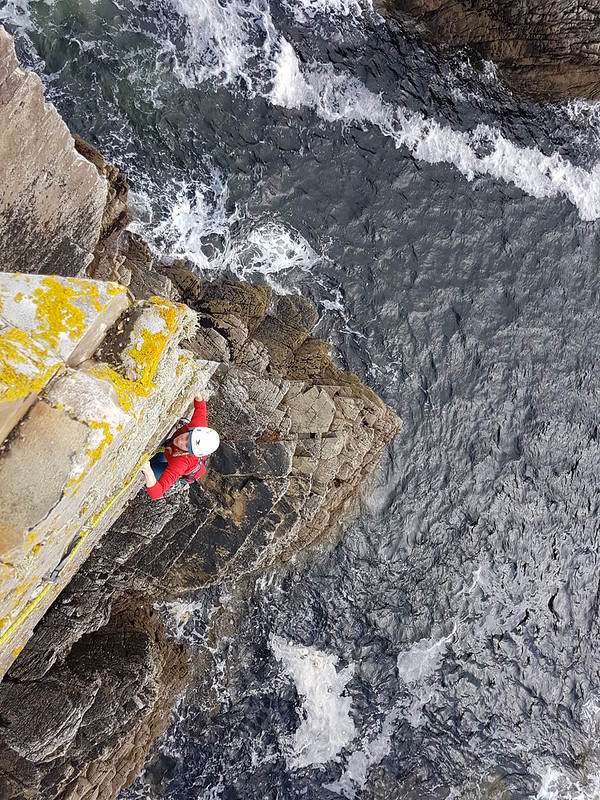 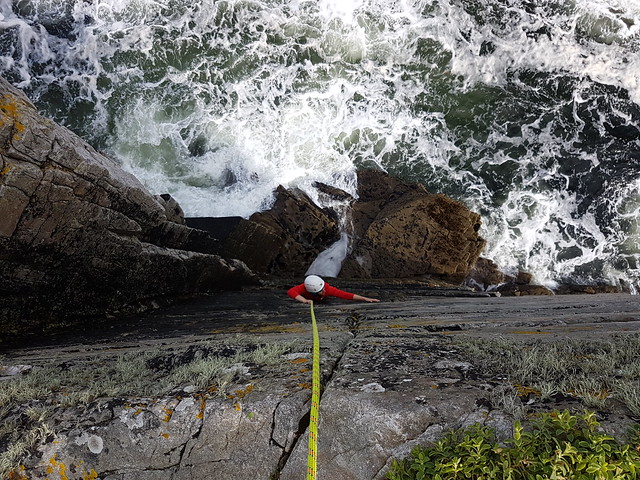 All too soon, it was time to leave. The ocean took the opportunity to have the last laugh though, and just as we prepared to descend, a particularly turbulent wave collided into the stack. Soaked through and dripping, we shivered and slithered down as the tide started to roll in. 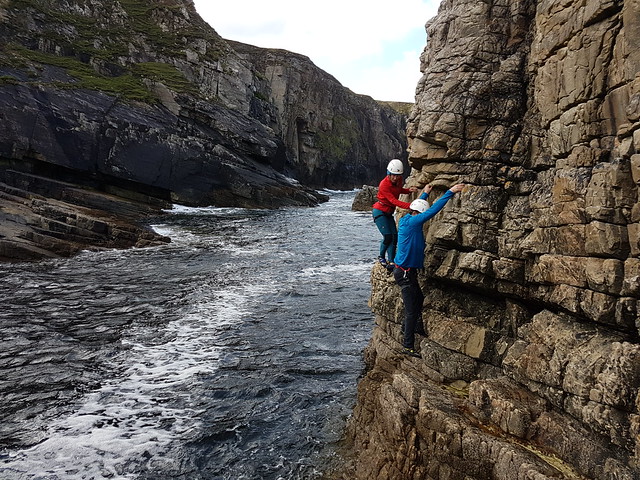 With our smelly, saturated climbing shoes drying on the dashboard and a fresh set of clothes donned, we followed Iain to our afternoon destination, to the cliffs in Malinbeg, situated just outside the ancient village of Glencolmcille. A popular stop on the Wild Atlantic Way for its Napoleonic forts, historic folk village and the breathtaking Silver Strand beach, the region also offers a plethora of climbing routes. 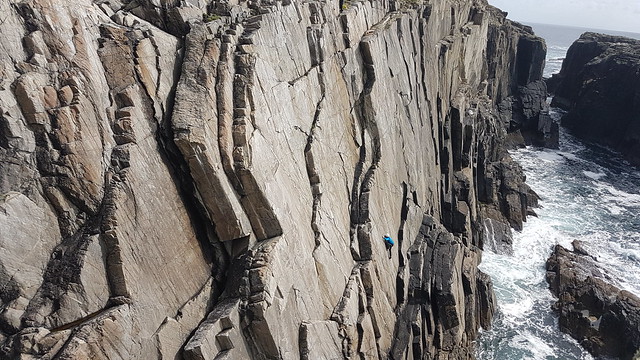 It’s a weird feeling, leaning back over the edge of a cliff. Every animalistic instinct in your body is firing, pleading with you not to do it. Even as your stomach drops and you have the initial awkward tap dance as your feet find the rock, your brain is curious, excited, surveying the rock for anticipated foot and handholds. 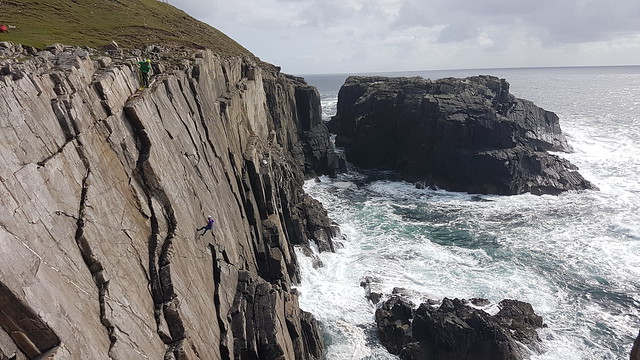 Like Berg stack, Iain’s choice of Malinbeg was an excellent choice to challenge our ability, and showed just how knowledgeable he is of the climbing options Donegal offers. It was only when he eventually admitted to helping write the guidebook to sea stack climbing in Donegal however, that we fully realised his depth of experience of climbing in the area. 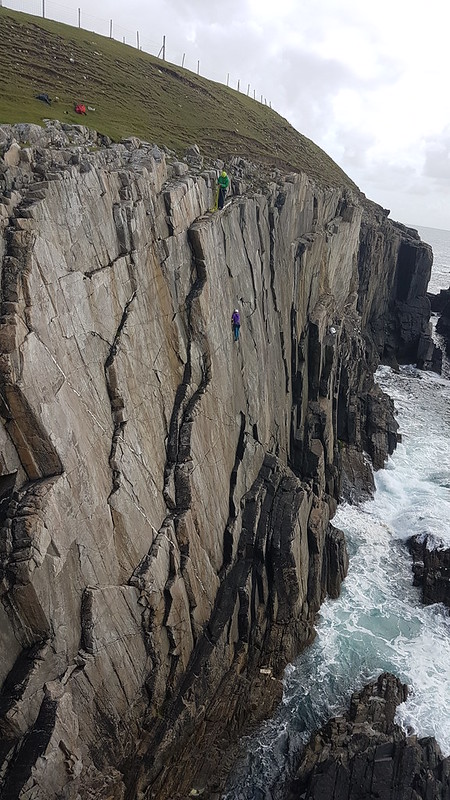 Here the rock was slightly sharper and more angular, and required greater flexibility to access toe jams, as well as sufficient strength to drag myself up crimps and monoholds. The ocean waves crashing against the rocks below added greater drama and thrills whenever falling off a route (which was often in my case). 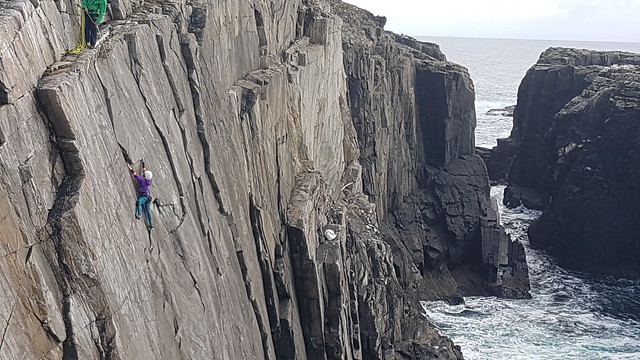 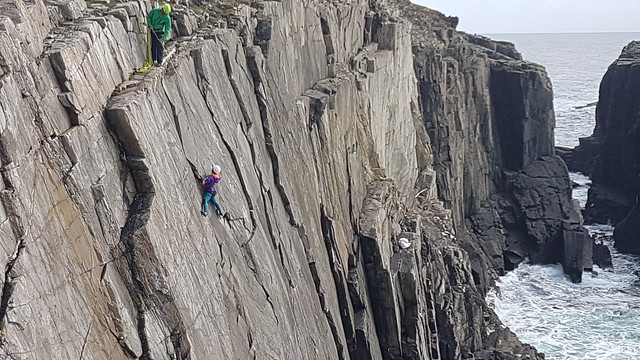 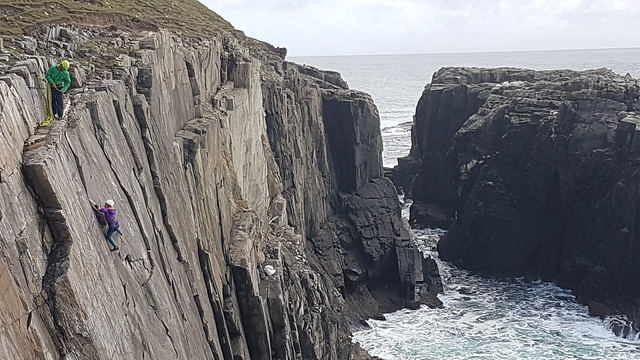 The cliffs along Donegal’s coast belong to the same stretch of rock at Giant’s Causeway, Iain told us. Examining the rock up close, with its square-ish, column structure distributed in chunky, slabby layers, it was easy to imagine it being related to its more famous cousin to the east. However with only one other set of climbers around that day to share the entire cliff face with, I know which one I’d prefer to be climbing. 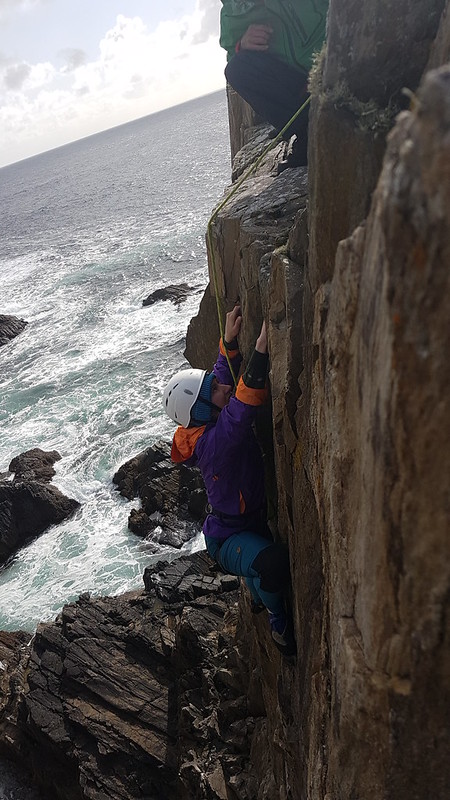 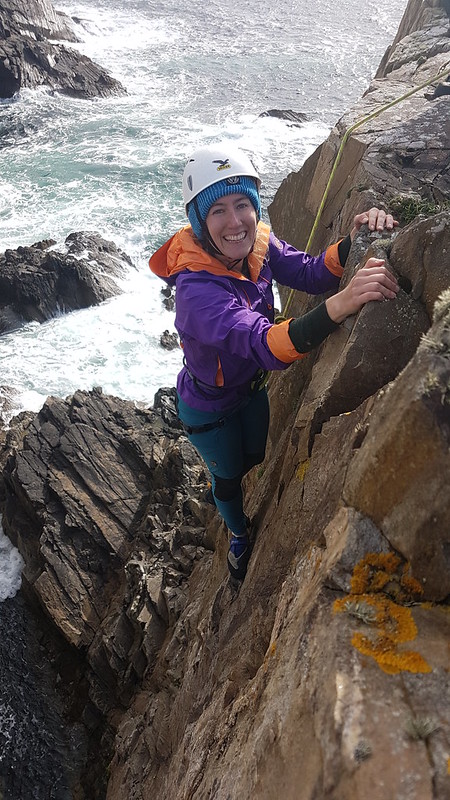 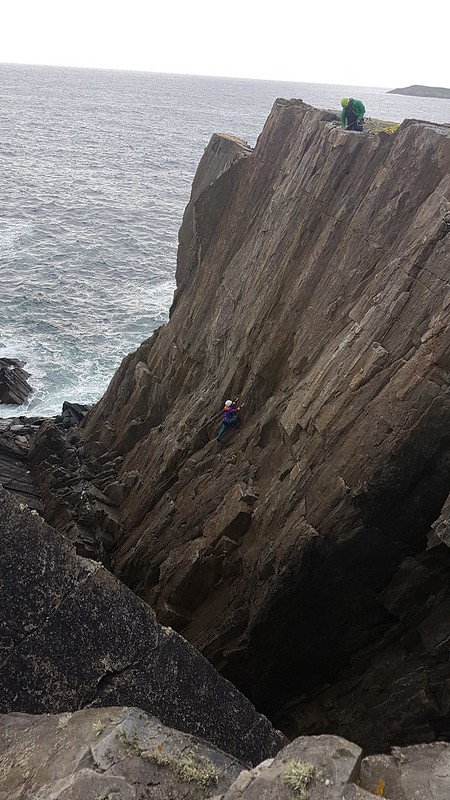 After spending several more hours clambering over grade 5a to 6c routes, our day was over in a blur, and it was time to say goodbye to Iain. After spending the day regaling us with anecdotes of life in Donegal, his stories of exploring Donegal’s coast and his jokes, Iain gave us one more tidbit of information. With a gesture towards the setting sun we ventured 200 metres over to Silver Strand, a stretch of coastline with tumbling waterfalls, vertiginous fields and cyan waters that would look more commonplace on a tropical island. Not the worst spot to cool off sore feet after a hard day’s climbing, eh? 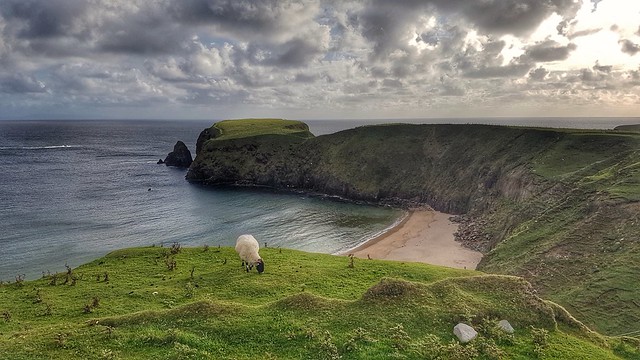 Looking for more adventure in Donegal? Check out my recommendations of outdoorsy activities to try in Donegal, Ireland.

Fun Stuff You Will Find on This Blog…